Welcome to the inaugural Behavior Change for Good (BCFG) Newsletter! This very occasional newsletter will keep you up-to-date on science and outreach from members of our amazing team. The first installment includes an interview with Professor Shlomo Benartzi about his work encouraging people to save more for retirement, a recent article by BCFG scientists about how to reduce self-control failures, suggested books and podcasts to explore that feature BCFG team members, and much, much more. We hope you’ll enjoy diving into our first dispatch!

We’re delighted to be reading four fabulous books released in the last year by BCFG Team Scientists. The first explores how our behavior has evolved for good (Blueprint), the second explains how people can fight bias (The Person You Mean to Be), the third evaluates what we know, and don’t know, about parenting young children (Cribsheet), and the fourth explains how individual and societal change happens (How Change Happens). We recommend them all!

Huge congratulations to BCFG Scientists Bob Cialdini, David Laibson, and Matt Rabin on their recent election to the National Academy of Sciences.

Shlomo Benartzi, the BCFG Distinguished Senior Fellow, is a behavioral economist who works on creating digital nudges that leverage technology to test and scale up interventions capable of helping millions make better financial decisions. With Nobel Laureate Richard Thaler, he pioneered the Save More Tomorrow™ (SMarT) program, a behavioral program that nudges employees to increase their savings rates gradually over time. In their original research, Benartzi and Thaler found that SMarT increased employee savings rates from 3.5 percent to 13.6 percent. The SMarT program is now offered by more than half of the large retirement plans in the U.S. and a growing number of plans in Australia and the U.K. The program has also been incorporated into the Pension Protection Act of 2006, enabling approximately 15 million Americans to boost their retirement savings.

BCFG recently chatted with Shlomo about his current work and its implications for behavior change:

Could you summarize a recent project you’ve been involved with that has relevant insights for the BCFG Initiative?

Hal Hershfield, Steve Shu and I recently collaborated on a research study with Acorns, the popular robo-saving and investing app. We showed that the right framing can make a huge difference when it comes to saving decisions. In particular, we showed that asking people if they want to save $5 a day (as opposed to $150 a month) quadrupled the percentage of users signing up for recurring deposits. (It also eliminated the income savings gap, so that low-income users were just as likely to enroll as high-income users.) Furthermore, we showed that most of these new savers continued to save six months later. This demonstrates that, if you can use behavioral insights to get people on the right path, then they’ll usually stick to that path, especially if the savings is automated. We should make the right choice the easiest choice.

What’s one common obstacle people experience when trying to save more?

I’d say one of the biggest obstacle is the pull of the “here and now,” or what behavioral scientists refer to as present bias. The desire for immediate gratification and spending is a hard one to resist, especially if the alternative is saving for your distant future (which feels less salient and emotional). Save More Tomorrow, a program Nobel Laureate Richard Thaler and I developed, got around this problem by asking people if they wanted to commit saving more at some point in the near future, like 6 months from now. This meant present bias wasn’t a factor in their decisions. About 15 million American workers have increased their retirement savings using the Save More Tomorrow program.

What’s one way in which you think technology can help promote enduring behavior change when it comes to saving?

We’ve learned that traditional financial education doesn’t work, and that even several hours of education often fails to meaningfully change spending and saving behavior. However, in a recent study I conducted with Yaron Levi (now a behavioral economist at USC) we showed that digital technology could make a big difference. We set out to test the impact of just-in-time financial education using the Personal Capital mobile app. The app allowed users to get their latest account balance and spending details on their mobile devices, making the information easily accessible when they were making purchase decisions. This availability turned out to have a huge impact, with the average user decreasing their monthly spending by 15.7%. Not surprisingly, almost all of that decrease came in the form of discretionary spending, with users spending far less on items such as dining out. We speculate that the app was effective because it delivered a just-in-time form of financial education, minimizing the timing gap between the information and the decision.

Of course, this is just one example of how technology can change financial behavior. I think we’re already discovering that there are countless other forms of digital nudging that can help us save and invest, whether it’s personalized videos or better online design.

Freakonomics Radio: How To Launch a Behavior-Change Revolution

Stephen Dubner, host of Freakonomics, shares the story of how BCFG Team Scientists are trying to better understand what changes human behavior in a lasting way.

WorkLife with Adam Grant: The Perils of Following Your Career Passion

BCFG Team Scientist Adam Grant talks with Angela Duckworth about the benefits of engaging in behaviors that can develop passion for your work.

Katy Milkman, with BCFG Team Scientist Todd Rogers, talk about how we’re influenced by the people around us, and how that can be harnessed to help change behavior.

A Recent Article by BCFG Scientists on Reducing Self-Control Failures 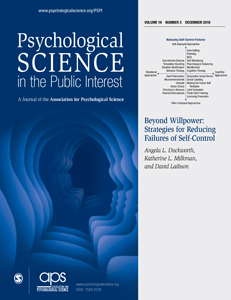 Beyond Willpower: Strategies for Reducing Failures of Self-Control

This recent Psychological Science in the Public Interestarticle, written by BCFG co-directors Angela Duckworth and Katy Milkman as well as team scientist David Laibson synthesizes contemporary research on what policies can be used to reduce failures of self-control. The authors’ recent Washington Post op-ed offers a snapshot of the article’s key lessons.

Teaching: A BCFG Undergraduate Seminar the Science of Behavior Change

The Science of Behavior Change seminar in Fall 2018

BCFG Co-Directors Angela Duckworth and Katy Milkman co-taught a seminar at Penn on “The Science of Behavior Change” in the fall of 2018 that introduced students to sustainable strategies for behavior change through the dual lens of psychology and economics. Guest speakers included team scientists like Wendy Wood, Todd Rogers and Kevin Volpp as well as team partners like David Coleman, CEO of the College Board, Maya Shankar, Global Head of Behavioral Science at Google, and Gary Foster, Chief Scientific Officer at Weight Watchers. The class was a huge hit and will be offered again in Fall of 2020 to Penn students.  If you’re interested in the syllabus, you can check it out here.

Film: A Short Film about our Work at BCFG

The Behavior Change for Good Initiative at the University of Pennsylvania is co-led by Psychology Professor Angela Duckworth and Wharton Professor Katy Milkman. BCFG unites leaders in the social sciences, medicine, computer science, and neuroscience to propel science forward on enduring behavior change.